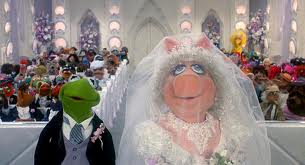 Here’s an interview from the Raging Artists blog: “My comedy comes from the things that make me cry,” explains Hersh Rephun about the source of his “Rainbow Connection” parody, featured in a YouTube video produced by Jordan Brady. “If I could write sad and beautiful music, this would be a much more serious video about marriage equality and finally being on the right side of history. Instead, it has muppets getting divorced.”

For Hersh, the choice of “Rainbow Connection” has as much to do with song itself as the apt title. “I’ve been a huge fan of the song by Paul Williams and Kenneth Ascher since I was a kid watching ‘The Muppet Movie’ and the message of unity was already there,” Hersh relates. There’s a deeper connection, too. “I knew at 7 years old that I was different, that I was an entertainer. That’s what a gay or lesbian person feels. All we want is to be accepted and loved for who we are.” Of the vocal, he notes, “I do impressions, but it’s always gotta be in the context of a story or an idea. I didn’t even know I could do Kermit’s voice until I had something for him to say.”

Hersh began performing the parody onstage about a month ago, and the idea for the video came from Brady, a director, who was in the audience when Hersh headlined at Saba Sushi June 27. “Witnessing Hersh perform the parody live, I thought this gem needed to be shared with a larger audience,” Brady says. “Hersh’s support of equality, woven with comedic criticism of all marriage was inspiring!” “As someone who’s been married twice with four kids, I talk a lot about this stuff in my act. Being a couple is natural and everyone should experience it openly and fully,” Hersh affirms. “They should also fully experience student loans, monogamy and divorce – you know, the unnatural stuff.”

While “Rainbow Connection” comes from the heart and certainly is topical, Hersh admits something is still missing. “We couldn’t find video of Kermit twerking,” he says. “But I hope the kids and the dirty old men watch anyway.”