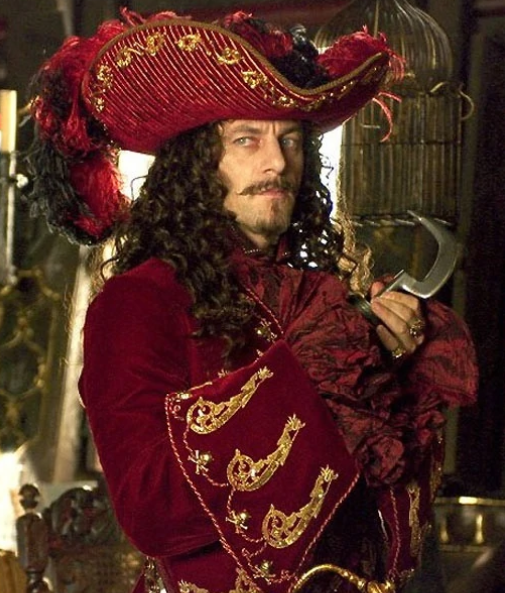 Anyone familiar with seafaring knows that captaining a brig requires a deft touch and considerable confidence. James Hook, who cuts quite a sartorial swath as Captain of the Jolly Roger, is a well-known desperado of the seas, referred to by author J.M. Barrie as “Blackbeard’s bo’sun (boatswain)” and “the only man of whom Barbecue (aka Long John Silver) was afraid.” And yet, if we are known by the company we keep, Captain Hook’s ongoing association with his kind-hearted First Mate Mr. Smee is telling. While it is only natural – and necessary – for a captain to be feared, it is clear that James Hook is also loved. He has also been known to encourage singing on board the ship, engaging his crew in the kind of bonding so necessary for their success and mental health.

Further evidence of Captain Hook’s complexity may be found in the affirmation of his own fears. Widely known to cringe at the sight of his own blood, this leader is also understandably afraid of a certain crocodile who ate one of his hands, cut off in a fierce battle (the iron hook that replaced it gave the captain his name, revealing a poetic flair in the face of tragedy). Shattering preconceptions about masculinity, James Hook is at once brave and soulful, a fearsome maverick who is not afraid to cry.

Speaking of battles, the hand in question was lost to Peter Pan, an impetuous, immature and contemptuous lad well past the age of personal responsibility yet unable to come to terms with even the most basic requirements of adulthood. Hook has sought to end Pan’s questionable influence on a group of minors whom Pan has nicknamed “The Lost Boys.”

In many ways the polar opposite of Pan, Captain Hook was raised of good stock, attending Eton College and Balliol College, Oxford, though a certain air of mystery continues to surround him as his fame grows over the years.

Peter Pan, meanwhile, has expanded his activities to include the inducement of London’s Darling children (including young Wendy, herself on the verge of womanhood) to join him in Neverland.

One needn’t look far to find reason for concern with this developing scenario, and to find comfort in the knowledge that Captain James Hook is ever at the helm.